The Verizon Center in Washington D.C. lacked atmosphere and fan interest in comparison to the Moda Center in Portland

Story and photo by James Harley 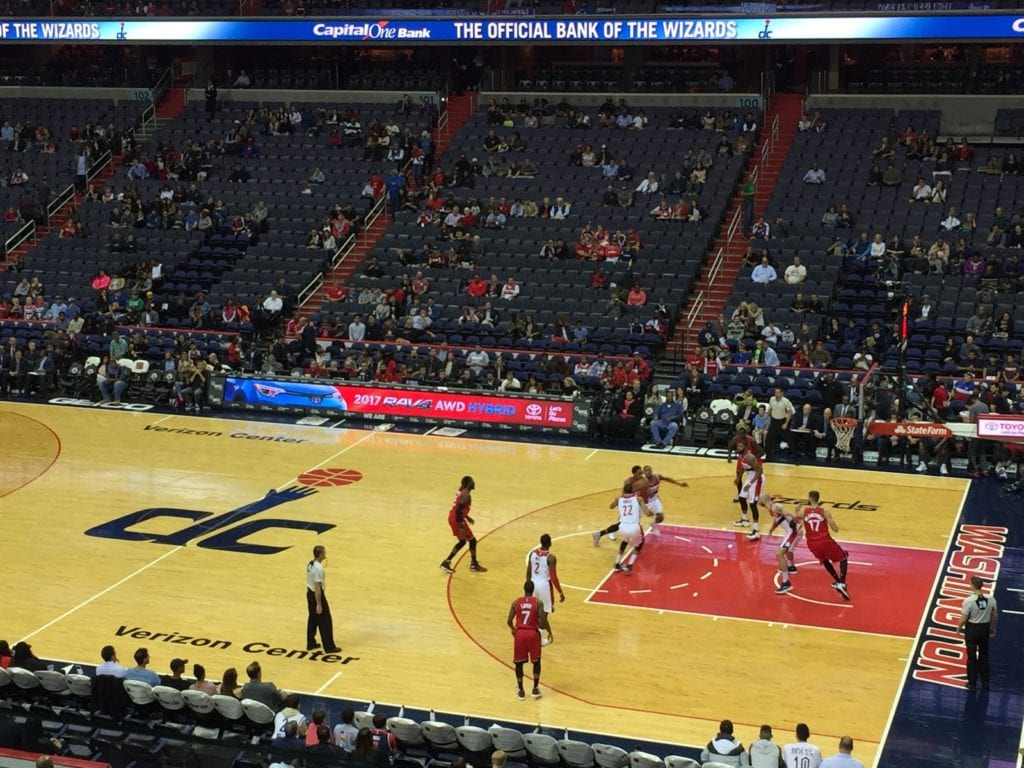 Being a big sports fan, one of the things I wanted to do while I was in Washington, D.C. was see a professional sporting event; however, my high expectations were not met.
On Friday, Oct. 21, I visited the Verizon Center in downtown D.C. and watched the Washington Wizards take on the Toronto Raptors in NBA preseason action. This was the first time I had gone to a professional sporting event outside the state of Oregon.
Walking into the Verizon Center, I immediately started making comparisons to the Moda Center here in Portland, and the differences were big.
The facility seems much older than the Moda Center. The area before entering the actual stadium was much less modern, even though the Moda Center is two years older. Food options were limited, with fewer opportunities to purchase team apparel.
Inside, the seating was similar to other arenas, though of course it had its own features. In the rafters hung jersey numbers from Washington, D.C.’s basketball and hockey teams, and even Georgetown’s basketball team, which plays at the Verizon Center.
When the game started, I saw empty seats everywhere. Granted, it was just a preseason game, but even the Moda Center can sell more tickets in the preseason.
Even though the home team led wire to wire, there wasn’t much of a buzz from the crowd. The fans didn’t seem involved in the game, and the bland PA anouncer didn’t help. During the game, there wasn’t a lot of entertainment to get excited for, aside from the typical dance camera and a free throw contest, which didn’t end well and no fans got rewarded. Even the T-shirt toss was lame, as only fans in the 100-level seating got shirts, which was right next to the court.
The fans, however, were friendly. The few that sat around us welcomed us from out of town, and seemed interested in their team.
The main difference between the Verizon Center and the Moda Center was the atmosphere. Going into the Rose Quarter, fans can just feel the buzz before the game. Walking into the Moda Center has been an exciting experience every time.
The Moda Center is clean, looks modern, is very spacious and even has an escalator; whereas the Verizon Center had stairs off to the side in some places. The team store for the Trail Blazers had far more clothing selections than the Wizards’ team store as well.
However, as much as I’ve dissed the facility, it was still cool to go to a game outside of the state of Oregon. It was refreshing to see new talented players ball it out on a new court, and I was pumped to see one of my favorite NBA players, John Wall, play.
On top of that, everybody there was helpful and genuinely nice, which made what could’ve been a negative experience, a good one.
Don’t take your Moda Center experience for granted. Though I may have some bias for the home teams here in Portland, there was definitely a separation between the East Coast facility and the one here. I still recommend going to an event outside of the state if you ever have a chance.