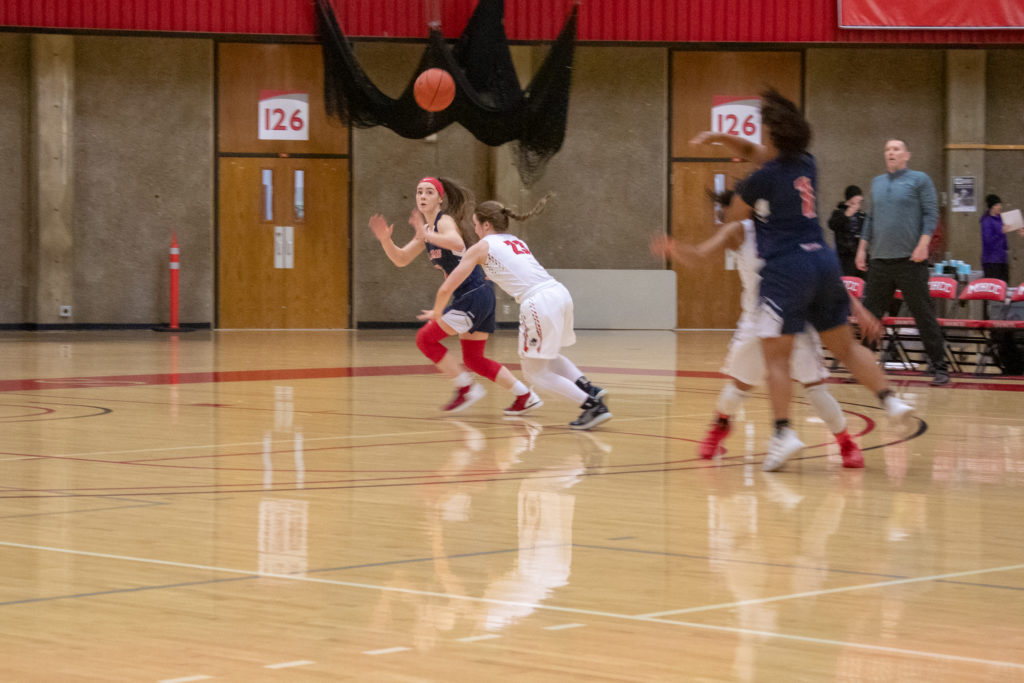 It didn’t look good for Clackamas Community College’s women’s basketball team at the halfway point. The team sat at 4-4 in league play, and Head Coach Jim Martineau knew his team would have to rack up wins the second round of league play to have a chance of making the NWAC playoffs.

“If we would’ve got this one I would’ve felt pretty good about our chances for playoffs,” Martineau said after Clackamas lost to Mt. Hood on Jan. 30. “We’re probably a game out right now, and we’re probably going to have to go 6-2 the last stretch.”

The Cougars outperformed the 6-2 mark Martineau set and with a 74-73 win over Mt. Hood on February 27 the Cougars finished 7-1 in the second round of league and clinched third place in the South Region.

The contest was a back and forth affair with the Cougars and Saints trading buckets. Mt. Hood led by nine with one minute remaining in the first quarter, but two quick baskets by Clackamas brought the Saints lead down to 5, 24-19.

Clackamas tied the score 28-28 on a jump shot by Savannah Duarte with 4:44 left to play in the first half and 30 seconds later Duarte hit another jumper to give the Cougars a 30-28 lead. Duarte led Clackamas in scoring, putting up eight points on 4-5 shooting in the second quarter and the Cougars took a 34-29 lead into the locker room after holding Mt. Hood to just five points in the second quarter.

Clackamas maintained their lead for the entirety of the third quarter and headed for the final quarter with a 56-50 advantage. The Saints mounted a ferocious comeback late in the game, tightening the score at 71-72 with 12 seconds left to play. Mt. Hood fouled immediately and sent freshman guard Paige Downer to the charity stripe where she drilled two free throws to give Clackamas a three point lead 74-71. Mt. Hood scored to make it 74- 73, but weren’t able to foul again before time expired.

“In the offensive column we can pretty much pencil in 20 [points] every night for [Buckley] and that’s huge. In high school, little kid basketball or the NBA if you can pencil in 20 points that’s huge.” Assistant Coach Kurt Guelsdorf said.

Buckley wasn’t a big offensive threat her first year with the Cougars, but this year she has averaged 21.2 points per game.

“Last year, just coming on as a walk-on freshman I didn’t know how it was going to play out,” Buckley said. “But definitely this year I like having the role of a leader and I don’t really fold under pressure so when we get in those tough situations I think my team relies on me and we’ve done a good job keeping each other up when we need to.”