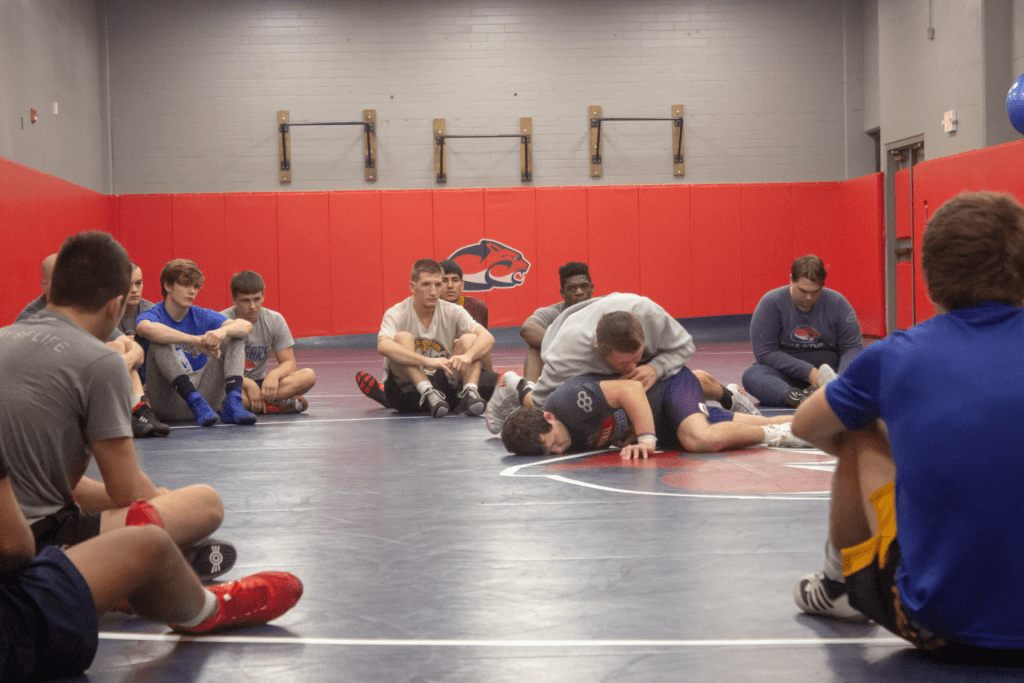 Clackamas Community College’s wrestling team is coming off the program’s third National Championship. The Cougars dominated the competition in the 2019 finale, scoring a NJCAA team record, 176.5 points. Returning four All-Americans and two other National Championship qualifiers, Clackamas is excited for the upcoming season, but trying to take it one day at a time.

As Hawaiian blend starts to flow from the Keurig in Head Coach Josh Rhoden’s office, an energy starts to build on the second floor of Randall Hall. It’s one hour and 38 minutes before the sun will rise, but a swarm of wrestlers is already gathering outside the new mat room waiting to get the 6 a.m. practice underway. Rhoden adds honey to his black coffee and checks to see if any wrestlers are missing.

The most notable not on the mat is Marty Margolis III. He’s in the basement rehabbing his shoulder that he injured during last year’s national tournament. He missed out on placing or receiving All-American honors, but Rhoden credited Margolis’s act as exemplifying the team’s drive. Six months after the dust settled, Margolis says he doesn’t regret his decision to wrestle at nationals.

“Not even a little bit, I mean it was one more match, not a problem. I don’t regret it at all,” Margolis III said. “[My decision to wrestle] wasn’t for me, it was for the team. For me I would be unsatisfied if I wasn’t on top of the podium, so it hurts me either way.”

Margolis III is hoping to complete rehab and return to action by New Year’s, and once he does, the sophomore has big plans for himself.

“I plan on being the national champion,” Margolis III said. “I just gotta get these shoulders right. That’s been the goal since nationals last year, get better and come right back to the same tournament and prove that I deserve to be on top.”

As Margolis continues to workout his shoulders, returning All-Americans Zeth Brower and Jason Shaener spar in the mat room. The pair are working on the bulldog and becoming better wrestlers each practice.

“We’re trying not to focus on being national champions [in 2018], we’re mainly just focused on wrestling and getting better at what we do,” Brower said.

The reigning national champions open the season in three days at Southwestern Oregon Community College, and Shaener says the intensity and the competition during practice has him and his teammates ready to go.

“We wrestle so hard in here that when we drive a couple hours for one match, it’s nothing man,” Shaener said. “We wrestle four matches in the morning and it’s tough matches against people that could be All-Americans or National Champions every day.”

The athletes aren’t the only ones looking to improve their craft. Associate Head Coach Brett Sanchez, now in his second year, says he noticed areas he could improve his discipline and organization.

“You literally gotta do your best on time management, so I’ve been doing schedules and planners just so you can be on top of everything,” Sanchez said. “And when you do it that way these guys see it and learn how to become self-managers and become organized.”

Sanchez got married this offseason and said he’s working on balancing being a husband and a coach full-time. Along with his coaching and recruiting duties, the second-year coach dropped a significant amount of weight this offseason as he felt he wasn’t at his best physical condition.

“I was weighing around 240 last year at the national tourney last year, I realized I wasn’t my best, I couldn’t teach the technique I wanted to teach, I wasn’t able to bend down the way I wanted to bend down,” Sanchez said. “When you move like that sometimes these guys are, kind of like ‘ehh,’ now I move a lot better, I’m healthier now, and guys kind are ‘Okay I believe you now,’ when I’m healthy I’m better and they get better.”

The coaching staff and the wrestlers have a lot in common in this program. Both groups are still hungry for success, both are striving to be the best they can be, and both are taking it one day at a time.

“I think every year it’s for these guys to get better every day,” Rhoden said about expectations of the upcoming dual. “I know that sounds cliché, but it works for us. We’re never going to be results-driven, it’s not like if we go down to Coos Bay and lose it’s not like the sky is falling, we just need to make some adjustments. I think the expectations are always to be one of the best teams in the country top to bottom, and if we do that every single day and get everyone from our best guy to our worst guy working as hard as they can, we’re going to get the result we want.”

As Clackamas has grown into a national powerhouse year in and year out, the target on their back has grown, and they love it.

“There’s always something like that everywhere we go,” Rhoden said. “Obviously winning a national championship helps us in terms of people loving to hate you, but they sort of already did because we’ve been pretty good for a while. Finally getting [the national championship] the way we did, I’m sure didn’t help with our love-hate relationship with the rest of the United States in wrestling at this level, but that’s okay.”

“That man Josh Rhoden, he created an environment where you feel like you can better yourself in all aspects, either academically, becoming a self-manager, becoming accountable, getting better at wrestling, of course,” Sanchez said. “A little place like this in Oregon City you have everything you need to be successful. It doesn’t really matter where you are on the map, as long as you’re in an environment like that where you feel the love and support, I think anyone would come over here.”