Wrestlers reflect on Rhoden, time on the mat

Victor Jacinto said he came to Clackamas Community College to get out of his home town. Steele Starren didn’t even want to wrestle in college. Both wrestlers competed in the national championship in March, where Clackamas won its fourth consecutive title. The two freshmen sat down to talk about their experiences wrestling during Covid and moving to Oregon City to wrestle for Coach Josh Rhoden.

TCP: What is your normal wrestling routine?

Starren: During the season, we do 6 a.m. every day, except for when we get a break on Wednesday. Then we go back at like 3 for like conditioning, 3 to like to 5 for conditioning.

Jacinto: Yeah, so if we don’t have a tournament coming up or any duels we usually have something on Saturday where we just do like a live match. Kind of like a simulation of a tournament and we have like three matches. That’ll be it.

TCP: How do you prepare for a match? What goes into all that? 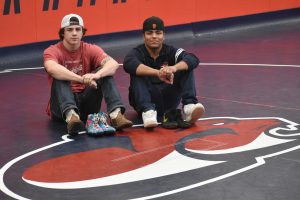 Starren: Usually, you’re pretty focused on just getting your body right. Because then you gotta cut a lot of weight, like it really drains you. Like mentally and physically. So I don’t know this year I’ve only cut a couple pounds. So I showed up to the tournament like a couple of pounds over and then we used to practice wherever we went, so we could cut some weight.

Jacinto: So you have to be right on weight. So my weight was 149. And I couldn’t be like one ounce over. So say if I woke up the morning of a tournament, and I was like point four over, I would have to go and run and shadow wrestle Steele to lose some ounces.

TCP: Is your wrestling schedule hard to juggle with your personal life?

Starren: My schedule kind of sucked. Because I have eight credit classes for the welding program. So I’d go at 6 in the morning to 8, to practice. And then from 8 to 12 I had class. And then, I’d go home. I got to  eat and hang out for a little bit and then we’d go back at 3 for conditioning. Then I’d go back to school from 6 to 10 for welding. It’s pretty tough to juggle it all. I live alone. so it was like usually the first couple months I was living with people and it was easier to like, go home like hang out with them because obviously I didn’t go out or anything because we’re tired. But once I started living alone, it was way harder to have a social life.

Jacinto: I mean sometimes your only friends are the only people that you really like, which are your coaches and your teammates. You’re spending hours upon hours together so you guys get really close and you guys are pretty much like your guys only friends and like you trust them with a lot of stuff.

TCP: How do you make sure to maintain your same weight? 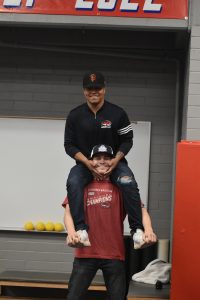 Starren and Jacinto say it is hard to find time to be with friends, but find strong friendship with their coaches and teammates. Photo Credit: Ayla Fashana

Starren: You have to make sure to maintain your weight class like the whole week.

Jacinto: It’s kind of like the whole system so you just have to start eating in smaller portions than you did before. You just start off at the beginning of the week with a lot of water and then kind of taper down your water to the end of the week. So, pretty much you’re just losing all the water weight that you’re drinking. This is not a good way to cut away for a long period of time. I’m just saying.

TCP: Coach Josh Rhoden has led the team to several national championships at CCC. If you guys had one thing to say about him, what would you say?

Starren: I’d say that he was just super inspiring. He inspired everybody to come down here and really buy into the program which is like, hard to do and you’re like waking up super early and it’s really hard practices and stuff. So he was really he’s really good talker, pushing us into doing all the hard stuff that we didn’t want to do.

Jacinto: Yeah, he was kind of like that guy in the morning where he just had his coffee and was ready to go. He’s the one who always had the most energy in the morning and he kind of started off the practice and just gave us energy to get through that. I want to tell him that we love him and we appreciate everything he has done for us.

TCP: What are your plans after CCC?

Starren: I’m not sure at this point. My old man owns a construction company in Kalispell, Montana. So it’s either I’ll see how I feel after my years here. And then I’ll either go to work or transfer to a four year, like Oregon State.

Jacinto: Probably transfer to a four year, that’s the plan for me, just going to any school that offers.