Clackamas Community College’s wrestling program is one of the best college wrestling programs in the nation with six dual-meet national championships. It’s hard to believe such a powerhouse program was built while practicing out of a 1,500-square-foot storage closet. Now the Cougars have a practice facility that is fit for a champion.

In the second story of Randall Hall, the new mat room used space where rarely-used classrooms sat vacant for most of the year. At roughly 3,000 feet, the new mat room is twice the size of the original mat room and logistically is a lot better for Head Coach Josh Rhoden’s program. With the limited space of the old mat room, the coaching staff had to think of creative ways to get practice time with their team.

“We have ran two practices each afternoon, rented the high school facility at Oregon City [High School] and split workouts between weight room and wrestling room in order to create a safe practice environment,” Rhoden said in an interview with the Clackamas Print last May.

Rhoden mentioned that most recruits and recruits’ parents who visited the campus previously were amazed that the program accomplished what they did in the old mat room.

Sophomore Braedon Orrino made his decision to come to Clackamas not based on the facilities, but on Rhoden’s coaching.

“There is no place or coach I would rather be with,” Orrino said. “The lower facilities, I feel like, is what makes us so tough.”

But Orrino is glad for the new facility because of the work Rhoden put into the project.

“It means so much to Coach Rhoden,” Orrino said. “He has worked countless hours and years for this day to come and we couldn’t be happier for him.”

To Rhoden, the facility feels like validation of the hard work people in and around the program have put in to building a winner.

“This means a great deal to this program in so many ways,” Rhoden said. “In some ways it’s a nod to a job well done to the athletes, coaches and administrators who helped this program succeed and evolve to what it is now.”

The new mat room isn’t just benefiting the wrestling program, but also self-defense physical education classes that will use the space that before the construction was an unutilized space for the last two to three years, according to Athletic Director Jim Martineau.

“This was a super low cost, high impact restructure of classrooms,” Martineau said. “We knocked down some walls, moved some offices from one end to the other and created a space where they can get more wrestling team members in practice for sure, but we can also get bigger self-defense classes so it’s a win-win for sure.”

As far as a bump in recruiting due to the new mat room, Rhoden might have trouble accomplishing that, as he has already had five straight top-five recruiting classes, finishing with the second best recruiting class of all non-Division I schools this year. That ranking accounts for all Division-II, Division-III, NAIA and Junior College programs. Rhoden added jokingly that with the new mat room it will no longer be the last place he takes visiting recruits. 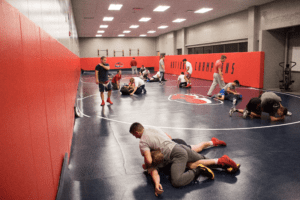