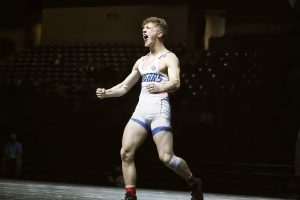 Zeth Brower, the 133lb National Champion after winning his individual tournament to clinch the title for Clackamas. Photo courtesy of Josh Rhoden.

In a year unlike any other, one thing remained the same: Clackamas wrestling taking home the NJCAA national championship. The team is only the fifth team in NJCAA history to win three championships in a row, and the first since Iowa Central Community College, which won four in a row from 2005-2009. Cougar coach Josh Rhoden was not taking anything for granted, and that included even getting the chance to compete for a third championship.

“Throughout the event we talked about how grateful we all were to just be at the event,” Rhoden said via email. “In truth, every one of us thought we would be outside looking in this year. It was such a blessing and no small miracle to be in Council Bluffs, Iowa that week in April.”

Instead of being on the outside looking in, Clackamas will forever be in the record books with their three-peat. This championship came with its challenges, from fires to COVID shutting down the athletics department for a month, and even an ice storm. These challenges helped Clackamas in the end, when they had to overcome a deficit after never having led all match.

Rhoden recognized this, and stated via email, “We actually never led after any session until the final one. Why were we able to put our heads down and remain focused… I think it was our path to that point. It prepared us for uncertainty and setbacks. We met them head on and found a way in the end. Pretty awesome how Zeth finished a storybook ending in what was our last opportunity to score team points.”

Sophomore Zeth Brower said via text, “It still hasn’t really settled in yet, but the emotions were still there. The whole team had a sense of accomplishment considering the circumstances we were under. We were all grateful to be there and compete, so winning it was amazing to us.”

Not knowing if they would be able to compete hurt the team early on, as they lost 10-12 players due to that uncertainty.

Rhoden wrote, “The uncertainty of what we are training for absolutely caused problems. We lost about 10-12 guys in the fall to that unknown. We had to improvise, make do and honestly focus on what we could control which was ourselves and our opportunity to train where and however we could. Our guys who made that commitment did something that will serve them well for the rest of their lives. It was anything but easy in Oregon, especially seeing our rivals and competition actively training from the beginning of the school year throughout the entire season. There were absolute advantages that other teams had.”

The team was unable to train as much as other teams outside of Oregon due to COVID-19 restrictions, but once they started they never looked back.

Sophomore Cameron Enriquez said via text, “The hardest part about our season was just not knowing if we were going to have a season this year. It was really hard to stay focused and live a good lifestyle outside of practice this year because a lot of the time it felt like I was training for nothing. But I kept telling myself that even if we didn’t have a season this year that eventually we would be able to wrestle somewhere.”

Wrestling will be looking for a four-peat next year, an accomplishment only Iowa Central can claim for now.