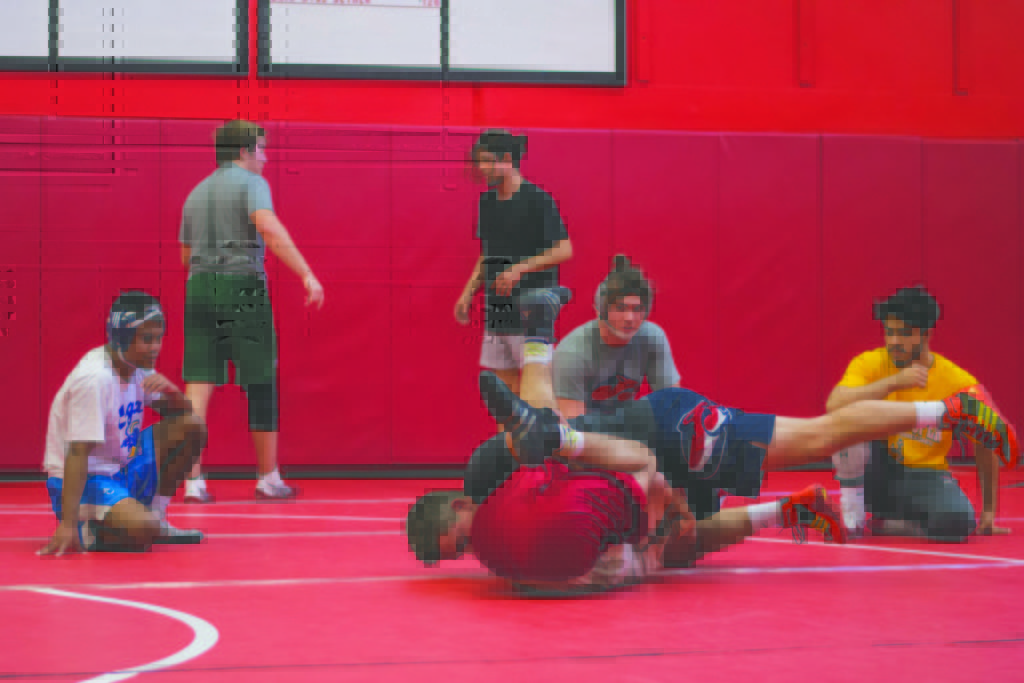 All eyes are on Clackamas Community College as the wrestling team heads into the five-month long grind that comes with the season. Following a 17-0 season and having won four straight national dual meet championships and four straight conference titles there’s a lot riding on the shoulders of head coach Josh Rhoden and team, though they’re more than well equipped to take on the task at hand.

When it comes to wrestling, often times it’s the repetition of practice that keeps a wrestler’s head in check. With 20 out of the 34 wrestlers being freshmen, coach Rhoden has a slightly altered plan in mind.

“We need to challenge them differently and we need to work with them differently,” said Rhoden. “It’s a long season, so if I’m a three-sport athlete in high school I’m only wrestling for three or four months. So we’ve built the schedule/training cycle that there’s breaks every six weeks so that these guys can keep fresh mentally. That worked for us last year, we saw great success with it.”

By no means does having a freshmen-heavy roster worry Rhoden in the slightest. For the past five years, CCC wrestling has held top five recruits other than D1 — due to CCC being apart of the NJCAA — giving them a wide range of wrestlers with high skill levels. The freshman-heavy roster will not represent the varsity roster, as the Cougars are welcoming back five All-Americans such as David Campbell (125 pounds), Dayton Racer (157 pounds) and Dylan Reel (174 pounds).

When asked how Rhoden planned to top last year’s season, he was straightforward in his opinion on how things could go. “It’s gonna be challenging. Obviously last year’s season is gonna be hard to compete with, but I think these guys are pretty game,” said Rhoden.

“They’ll be excited to try and best that. If we win the national duals this year, it will be the most ever in a row by a junior college team in the history of that event. There’s a lot on the line this year, and so thankfully, we’ve got a solid core group of guys that know and they have expectations for that so, hopefully we do similar with the exception of scoring three extra points at the end and getting first instead of second.”

Rhoden understands more than anyone just how important it is to have wrestlers who work hard in the mat room.

“It all starts in the wrestling room with doing the workouts and believing in the coaches as well as the process,” said David Campbell, who is returning to the mat after a second-place finish in nationals last year. “I’ve been wrestling for a while so, for myself especially, I’m expecting to go out there and win. I’m gonna give it my all.”

When asked he felt about being one of the higher ups in the mat room, he said, “I feel like a lot of people in there look at me as a team leader. Not only because I took second last year, but also because I know how I carry myself. I expect us to come together with more communication, it’s a wrestling room so it can get hostile at times and I need to make sure everyone has one common goal and works together as a team.”

Sophomore Dillon Ulrey, also a second-place finalist last season, is looking to snatch the first-place title as well and just like Campbell he is more than capable of achieving so.

“I plan to keep motivated,” said Ulrey. “At the end of last year I got a little complacent with my training because I was making weight easily at 165 so I got lazy with how I was doing things and I wasn’t taking the extra steps that I needed to take to keep in top shape. This year I’m planning on cutting to 157, so I think that’ll help keep me focused.”

When asked what he thought the team as a whole was capable of, Ulrey provided a bold but by no means outlandish statement, “I have very high expectations, I’d say we could be the best junior college team ever. I don’t see there being a junior college that I know of that could keep up with the star power that we have this year. I think we’re extremely solid, probably nine out of 10 weights I see us winning at least five. If we can stay healthy as a team I see no reason that we can’t go all the way.”

The Cougars first match was Nov. 4, and their first home meet is Nov. 11 against Umpqua Community College.