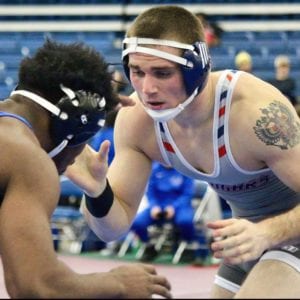 From Chico High to Clackamas Community College, and now on the verge of the UFC, former CCC wrestler Nicholas Maximov has been looking forward to this moment his entire life. Maximov started training Jiu Jitsu and MMA in middle school and realized that’s what he wanted to do with his life.

He gives credit to Clackamas for helping him achieve his goal of wrestling in the UFC.  While he is not the first Clackamas wrestler to go the route of combat sport, he is the first one to have the potential opportunity to wrestle in the UFC.

Maximov has been training with the renowned Nick Diaz Academy in Stockton, CA, since 2011. Maximov got connected with the Diaz Academy through his dad, who used to work with their head instructor.

Maximov said, “It’s gnarly, man. But it’s kind of how you see it on TV. You know, it’s difficult to hardcore. It’s not easy. There’s never an easy day. But you know, a lot like Clack in the sense that it’s always gonna be hard. But if you work hard, you’ll typically get what you want.”

Maximov fought in the UFC Contender Series on Nov. 17, and won his fight to improve his professional record to 6-0.  An unexpected drop out gave him the opportunity to fight up a weight class and he did not shy away. Instead, he stepped up to the challenge.

When presented with this opportunity a week before the fight, Maximov said his reaction was, “You know what? It’s kind of freaky kind of scary. Big dude. He’s not bad. You know, he’s a good heavyweight. But you know, it’s all about opportunity..”

Maximov had his doubts about fighting someone 60 pounds more than him, but said that it is not unusual to have doubts even when fighting someone your own weight. He said, “Even when I fight guys as the same size, even smaller than me, like, fuck, I can still lose definitely, you know, all the time that I could still lose, but that’s kind of what you’re in it for.”

Maximov became the first wrestler to officially be offered a spot on Dana White’s The Ultimate Fighter 29 series. Maximov said, “I think that opportunity is almost better than a contract in the sense you’re being on a reality TV show, you’re fighting. You’re gonna ultimately, probably get a contract, you know, if you fight well, when you fight, you’re gonna get a contract. I’m the first fighter announced to be on it. And it’s like, now they brought Ultimate Fighter back. So I think people are gonna like it.”

Clackamas wrestling coach Josh Rhoden sees TUF 29 as a great opportunity for Maximov.  Rhoden said via email, “I think being offered a spot on TUF is obviously important simply because in his case it means the boss (Dana White) and others see something in Nick. Whether he takes that opportunity or continues to compete on undercards in a more traditional path to a main event is something he and his coaches will have to decide. Obviously having guys like the Diaz brothers in your corner is an advantage in an industry that you want to have inside info in.  I think that is a big plus for him.”

Maximov’s career is definitely trending in the right direction, and he said via text, “Rhoden and Vig (Rich Vigorito) changed my life forever! I owe them everything that I’ve achieved thus far! I couldn’t thank them enough.”

Maximov said, “So I started doing that and kind of wanted it to be my career as I went on with life, just knowing if I wrestled and whatnot, it would always be like my backbone and what helped me throughout my career.”

TUF 29 will premiere in March 2021 and keep an eye out for Maximov to make his presence known.