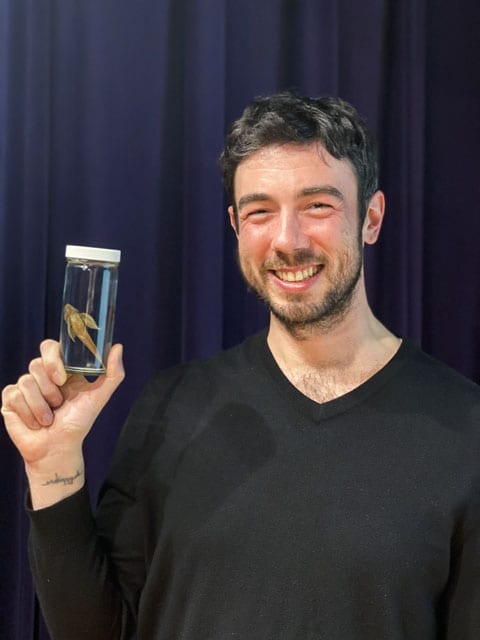 Apparently, deer and fish have a lot more in common than we thought. On January 23, Thaddaeus Buser, a biologist with a master’s degree in fishery, who is currently working in obtaining his Ph.D., visited CCC to give a presentation on cranial weapon morphology — simply put — how different animals in nature use “weaponry” such as spines or antlers on their heads.

In the presentation, Buser examined one creature in particular, that creature being the sculpin, a fish that’s found in various habitats, including along the Oregon coast. Sculpins have one main characteristic that makes them stand out from other fish — they have two relatively large, spiney bones on the sides of their head, which are used for a myriad of reasons. If a predator attacks a sculpin, they can extend these bones to fend off their would-be assailant. They can also use them to battle rival males in brutal duels where one male tries to puncture the skull of the other. Because of this intense form of interspecies combat, Buser has taken to calling sculpin “the stags of the sea” because their combative behavior mirrors that seen in many male land mammals such as deer and bighorn sheep. Along with this battle for mates, sculpin will claim rocks for their own that they are fiercely protective of, chasing away any rival males who come near.

Buser has spent years studying these fascinating fish and has made several discoveries about them, the most interesting of which being just how much the different species of sculpin differ with their bone structure. Some species’ facial weaponry grow as they mature, while some species’ shrink. They also vary in function. Certain species are more inclined to use the bones for mating and some use them more for defense against predators. Another discovery Buser made was concerning facial symmetry. In sculpin, the face of the fish is highly asymmetrical. If you were to compare faces of sculpin, you’d find that one half of one species face can match the corresponding half of another species face more than it matches its own face — this could be due to a number of reasons, though it’s likely due to the extended facial bones, which can cause this kind of asymmetry.

Apparently, the spines of a sculpin are a very unique tool among aquatic life. According to Buser, “They have a unique adaptation of their skull, no other fish has the ability to rotate that one bone away from the rest of the skull.” Buser hopes that the presentation informed students about the often-overlooked diversity found on the Oregon coast. “You don’t have to travel to the tropics or a coral reef somewhere to see a diversity of interesting fish that are beautiful in and of themselves,” Buser said. “All the major river systems around here have sculpins in them, and there’s lots that you can do to get to know them better and see how cool they are.” This talk was given as part of a series of STEM talks at CCC. The next talk titled “The Highwire Act of Adolescence” will take place February 28 in the Harmony West Community Room.